“Inflation peaked. But it is not the last of this cycle. We are likely to see CPI lower, possibly negative in the 2nd half 0f 2023, and the US in recession by any definition. The Federal Reserve will cut interest rates and the government will stimulate. And we will have another inflation spike. It’s not hard.”

I hope you had a wonderful holiday season as well as a New Year. Now that we are in the new year, I would like to look back on the tumultuous year in the markets that was 2023 as well as what we have in store for the coming year. Last year was one of the most difficult years for investors since the 2008 financial crisis. It was a culmination of many events, but the strong decline in bonds as well as stocks made it particularly difficult. Bonds had one of the worst years I can remember and their traditional nature of being risk off has seriously come in to question. I will dive more into this as well as how I think it will play out going forward. We also saw the implosion of high growth tech, many cryptocurrencies cratered, and foreign exchange rates made historical moves as well.

The Death of the 60/40 Portfolio?
Traditionally, we think of stocks and bonds as moving in opposite directions. During risk-on periods, stocks go up and bonds go down, and vice versa during risk-off periods. They tend to be inversely correlated. While the relationship between stocks and bonds may become more correlation during periods of high market stress and volatility, an allocation to bonds has historically acted as a cushion during major selloffs. In 2008, bonds declined with stocks but the decline was less steep and the recovery was faster. The same thing played out during the covid crash when bonds fell less and rallied faster. However, that all changed in 2022 as the drawdown in bonds was similar, if not worse than stocks, given their risk off nature. Some bond returns in 2022 for example:

This is the first time ever Treasury Bonds lost more than stocks and it did so in a year when stocks greatly underperformed. For example, the NASDAQ (IXIC) fell -33.1% and the S&P 500 (SPX) fell -19.4%. These returns were especially dreadful and were only amplified by the standard risk-off playbook failing. Bonds were crushed by the Federal Reserve raising interest rates and with most of the increases already happening, I think 2023 will be a much rosier year for bonds. If a recession were to happen, and the Fed was forced to cut rates, bonds could be the biggest benefactor. Something to keep an eye on! We will remain more cautious and will primarily be investing in short duration US Government bonds. The yields aren’t as high but they are safer.

Inflation and The Fed
Is inflation over? Or is it just biding its time before flying high again? Michael Burry predicted we may see a negative CPI (Consumer Price Index) report later this year and that wouldn’t surprise me. CPI has been trending down recently. It peaked at 9.1% in June and was recently reported at 7.1% in December. The Federal Reserve’s long-term target is 2% and they are still far away from that number. The Federal Reserve has been fighting inflation by raising the Federal Funds Rate during recent meetings and many analysts have it peaking from 4.5% to 5.5%. That number is still below the inflation level, but for how long?

By increasing the Federal Funds rate, the Federal Reserve has made borrowing money more expensive. This has helped lower inflation but we are not there yet. Some economists have called for the Fed to increase their target inflation rate to 3% or even 4%, but I find that unlikely. The Fed has been wrong and they do not want to be wrong again. Until inflation is down to 2%, the Federal Funds rate will stay where it is if not higher. This is definitely a headwind for stocks and the US Economy. 2021 was Federal Reserve induced mania and 2022 was a Federal Reserve induced bear market. It is now looking like 2023 will be the year the Fed brings us into recession. The Federal Reserve is in an extremely difficult position here. If they continue to raise rates, inflation will cool but recession becomes likely and the US Government will need to pay much more to service the debt. If they lower interest rates, inflation will come right back. The question then becomes, how bad do things need to get before the Fed ends the tightening cycle and begins to ease again? Going into this, we did not think the Fed would raise rates this high, this fast so we need to be careful with predictions going forward. The old saying is two wrongs don’t make a right. The Fed overstimulated post-covid causing inflation. Now they just might overtighten into a recession. Time will tell. If/when the Fed cut’s rates and stimulus is back on the table, I believe the market will rip higher. Fed policy is political and the pressure will only mount from here. 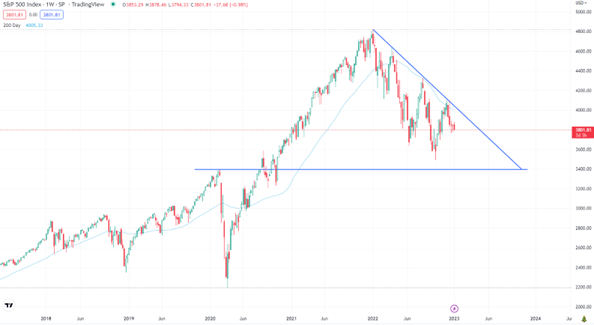 The chart above is the S&P 500 going back to 2018. I drew a horizontal line around $3,400 which was approximately the pre-covid crash high. I also drew a downsloping angle that touches all the lower highs in the market this year. This is the direction the market is heading and where we will have collision course. They are on track to meet later this year and a break in either direction will give us an idea to where the market heads next. A drop to the pre-covid highs is approximately 10% more downside from here. If we are to have a breakout to the upside past this down trendline, it is very possible the bear market is over and we can become more bullish again. Since 2009, the Fed has largely driven the market higher via Quantitive Easing (QE). The US stock market has been one of the best places in the world to invest since then and many investors have come to believe the Fed will bail them out and every dip is to be bought.

Market Psychology
Gallup recently released a report about Americans and their thoughts about 2023. About 8 in 10 foresee economic struggles, higher taxes and budget deficits. 90% expect political conflict, and most foresee more troubles in the societal and international arenas. Markets tend to bottom when everyone is disillusioned and we may be reaching that point. Before we get there, I still think we need to see more speculation come out of the market. Many “worthless” cryptocurrencies still have marketcaps over $1B, meme stocks are still pumping, and short dated option contracts are still experiencing extremely high volume. A large chunk of people are still treating the stock market like a casino. Zero commission trading, stimulus checks, and online message boards have brought in a young naïve generation into speculation. Unfortunately, we will probable see many people exit this market for a long time. We saw it after 2009 when people gave up. 2009 to 2019 was one the most hated bull markets of all time.

Gold
AS mentioned previously, we’re close to recession if not already in one. We are witnessing layoffs in fortune 500 companies being announced daily and the tech sector is being hit the hardest. If bad news is to continue, one the better places to look is gold. It benefits from volatility in stocks and it has long track record. Gold did well in the 1970’s inflation as well as the decade following the dot com crash. It ss a hated asset meaning people generally don’t like it and not a lot of money has entered. Both wall street and retail have ignored it for some time. Historically, we like to have an allocation around 5%-10% in client portfolios. That may increase this year. One of my favorite ways to trade gold is to own Franco Nevada (FNV). They are a streaming company that operates as a bank to finance mines. They do not do any mining, but rather lend money to mines in exchange for a royalty of the metals coming out of the ground. Since 2012, FNV is up almost 200% but physical gold is only up around 14%. 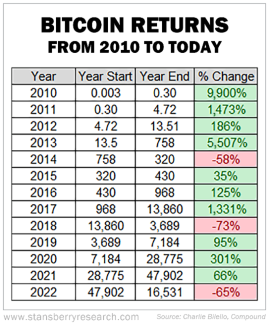 Bitcoin
Bitcoin, like the NASDAQ and other speculative positions had a bad year last year. Despite being labeled dead by financial media for the millionth time, it is still around. The cryptocurrency cratered as financial fraud was abundant and carried out on an international scale. Retail investors treated it like a religion and were happy to give it away to criminals in order to “earn yield.” The overconfidence lead to leverage, poor risk management, and ultimately a decline. The FTX collapse was very similar to the Lehman Brothers collapse and it will take time to work through. In order for it to attract big institutional money, there will need to be legislation and regulation passed that allows for open compliance and safeguards for retail investors. It is an extremely volatile asset but a small allocation may make sense for those with a high risk tolerance.

Conclusion
2022 was a bad year and now we have a recession in the forecast. Some may like the idea of just walking away and holding Cash. It worked in 2022 but for the most part it doesn’t work. Cash gives you optionality but it comes at a cost. The longer you hold it, the more it loses purchasing power via inflation and opportunity cost. Despite the bad news, the stock market is always a step ahead and discounting the bad news. We will continue to work to find opportunities while avoid getting hit too hard.

The opinions expressed in this commentary are those of the author and may not necessarily reflect those held by Kestra IS or Kestra AS. The material is for informational purposes only. It represents an assessment of the market environment at a specific point in time and is not intended to be a forecast of future events, or a guarantee of future results. It is not guaranteed by Kestra IS or Kestra AS for accuracy, does not purport to be complete and is not intended to be used as a primary basis for investment decisions. It should also not be construed as advice meeting the particular investment needs of any investor. Neither the information presented nor any opinion expressed constitutes a solicitation for the purchase or sale of any security.

The article and any opinions expressed therein are those of Carlson Asset Management and do not necessarily represent the opinions or strategies of Dorsey, Wright & Associates, LLC