“When you see mention of the strong dollar, the almighty dollar, please remember this is only in relation to other fiat currencies. The Dollar is not at all strong, and it is not getting stronger. We all see it every single day in prices of everything.” - Michael Burry June 7, 2022

"If the American people ever allow private banks to control the issue of their currency, first by inflation, then by deflation, the banks and corporations that will grow up around them will deprive the people of all property until their children wake up homeless on the continent their Fathers conquered."

Nowhere to hide! It has been an ugly year for not just stocks, but almost all asset classes. As of June 14th, here are some of the returns for major indexes and asset classes.

You get the picture; it has been an exceedingly difficult year as fund managers and ordinary investors look for refuge from inflation and seek return. Investors have been punished sitting in cash due to inflation, punished in fixed income via rising rates, and the equities market has shrunk due to tightening from the fed. The S&P 500 is down more than 20% meaning we are now technically in a bear market. The major story for the past year or so has been inflation. Janet Yellen and Jerome Powell have changed tune from calling inflation “transitory” to now calling it “sticky”. Recently, we even had a rare apology from former Federal Reserve Chair and current Secretary of the Treasury Janet Yellen when she admitted to underestimating the rate and duration of inflation. The Federal Reserve is in an extremely difficult position and so are lawmakers in D.C. In my last letter I went into detail on the tough decision the Federal Reserve has to make.

The first option has been the modus operandi for the Federal Reserve for the better part of a decade following the Great Financial Crisis. It has allowed for excess liquidity in the system and has helped prevent credit squeezes and financial catastrophe. Those are their words, not mine. Ben Bernanke was the original architect of this policy and it is known as “quantitative easing.” However, the downside of easy money has been speculation, malinvestment, and stubbornly high inflation.

The second option is what the Federal Reserve is now weighing. The Fed knows inflation is a problem and they have started to raise the Federal Funds rate in an attempt to lower inflation. I mentioned in my last several letters that I am highly skeptical the Fed will be able to raise rates much. History has shown that with every rate raising cycle, something “breaks” and the Fed is forced to reverse course and inject more liquidity to keep the financial system working. 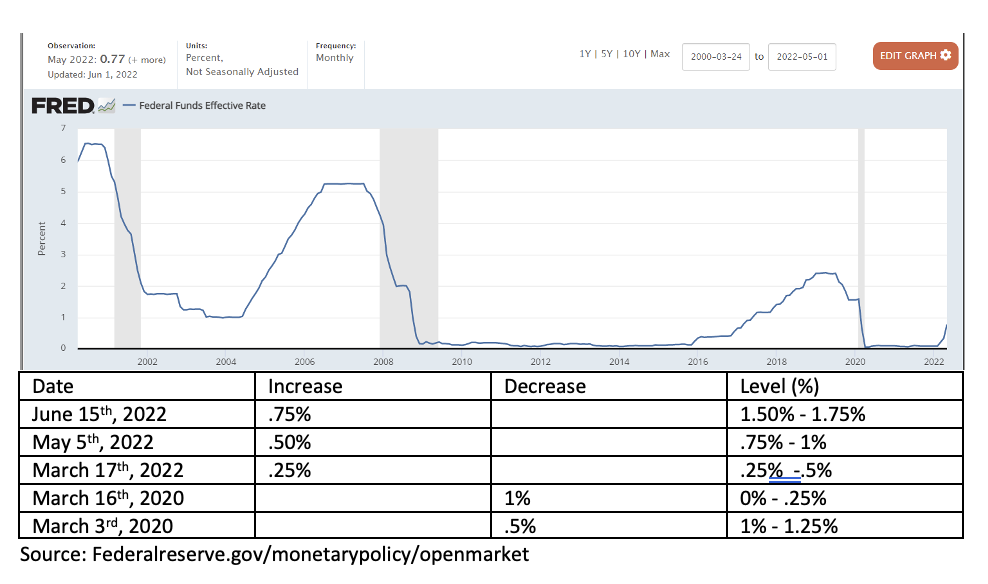 On the table and chart above, you can see the Federal Reserve Policy of lowering the Federal Funds Rate to near zero in March of 2020 followed by the two latest increase of a quarter and half a percent this year. You can also see the Federal Reserve lowering interest rates following the Dot Com Bubble, the Great Financial Crisis, and the Covid Crash. With every tightening cycle, rates are raised less and less and you can see that clearly in the chart. Since 2009, Rates have essentially been set at 0 with the exception of the 2018 era. In Past cycles, the Fed raised rates during expansionary market conditions and lowered rates when we were met with a recession. This time, the Fed may have missed the mark by being too slow to raise rates. Market conditions are much tighter now in 2022 than they were in late 2020 and all of 2021. In hindsight, the Fed should have raised rates back then instead of waiting till now. I theorize the politics of Covid made the decision too difficult.

Inflation, Recession, or Both?

The Fed has said on numerous occasions that they are looking for a “soft landing.” This is a fancy way of saying, “we will raise rates but not do too much damage to the markets or consumer confidence.” I think it is safe to say, based on the returns of the market so far, it has been a rough landing at best. So what is the Fed to do? Consumers are now paying more than double for gasoline, natural gas, and food prices are reaching a tipping point for many low-income people. Inflation is a major problem as essential goods and services are far outpacing incomes. I even read that 1/3 of people making $250,000 a year are living paycheck to paycheck. On the flip side, a measly .75% increase in interest rates has plunged equities into a bear market and inflation is still raging. On Friday, June 10th, the Consumer Price Index came out showing Year over Year Inflation at 8.6% which is the highest we have seen in 40 years. I am feeling the stress from this and I’m sure you are too. The doomsday scenario of inflation persisting in the midst of a recession may be playing out. Consumer sentiment is extremely negative, the University of Michigan Sentiment Index has fallen to a 40-year low... A consumer that is pessimistic along with skyrocketing inflation, while at the same time people's paychecks are shrinking. Not a good combination.

The Federal Reserve is set to meet on July 26th and September 20th. There is a lot of chatter that the Fed will be raising rates by .75% in the July meeting with some leeway being made for the September meeting. The anticipation of rates being increased has led to serious damage in many markets, not just the stock market. Previous rate raising cycles have been reversed due to things “breaking” and we are starting to see things break in many different markets.

One of the major financial indicators is the 10-year treasury bond yield. On Monday, June 13th the 10-year bond hit it’s highest level since 2011. Many loans are priced based on the 10-year, this means mortgages and various loans will start seeing big moves to the upside in the days and weeks ahead. This should, theoretically slow down the housing market and help put a dent in inflation. Again, at what cost?

The almighty Us Dollar has been the world reserve currency since the end of World War 2. It is the primary currency used in international trade and settlement and for purchasing of oil. It is often referred as the “petrodollar for this very reason. Despite inflation, the dollar has been very strong this year relative to other fiat currencies. The US has been using this as a political weapon against China, Russia, and essentially every other country. While it may seem like we have a lot to complain about here in America, it is much worse elsewhere as hyperinflation and shortages are much worse across the world due to the strong dollar.

It is becoming broadly accepted that we are now in/entering a recession. Markets are getting pummeled and people are getting anxious. The Federal Reserve’s playbook of lowering interest rates during recessions has been thwarted by Russia invading Ukraine, lingering Covid problems, and a potential energy/food crisis. As I have been saying for quite some time, I do not think the Fed has the option of raising interest rates and keeping them raised for very long. They simply cannot do so without making the recession much worse. On top of that, our country is over 30 Trillion dollars in debt. The interest payments on that debt will become too large a part of our national budget and politicians simply will not allow that. 3% interest rates would mean nearly $1 Trillion in annual interest. That’s a massive portion of national budget and that would be interest only. The national debt continues to rise at a parabolic level. In the meantime, Jerome Powell may get away with a few more interest rate hikes but I don’t think were much further away from a reversal in course. I hope I’m wrong and they are able to thread the needle between managing inflation and preventing a recession, but it seems to me they can only choose one. Any indication of the Fed reversing course could lead to a big move to the upside for stocks!

Today, the US Equity market is extremely oversold. Almost every technical indicator is flashing red and it feels like we are reaching capitulation. The bullish percent technical indicator below shows almost all US Equity sectors skewed to the left indicating we are at or close to a bottom. I haven’t seen the chart look this bad since the lows of 2020. The only sectors with any relative strength are oil, oil services, and gas utilities. The market is overdue for some good news and it would be nice to see some actionable policy decisions in regards to oil and gas from the White House. Any new changes in domestic oil policy or good foreign policy news in regards to Russia could lead to a decrease in oil prices and boost to the overall economy. 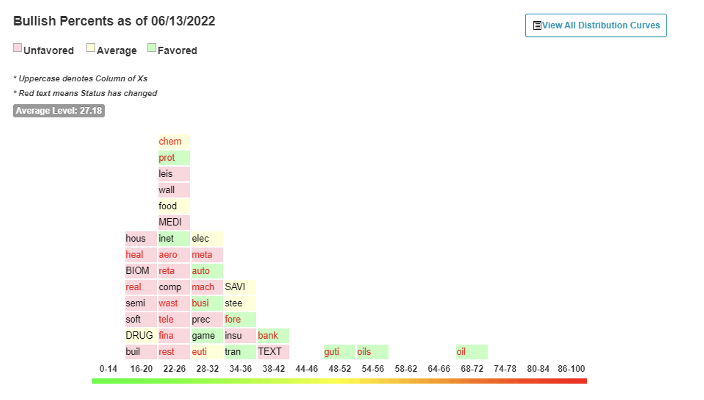 Given the inflation and weak market, my strongest recommendation right now would be to not panic. Fear is the strongest of emotions and can lead to some of the worst financial decisions. Me and my team are here to take your calls and answer your questions. I have been doing this for 40 years and I have witnessed many markets similar to this one, and we have always come out on the other side.

In the meantime, enjoy your summer and the beautiful weather! We will be here keeping an eye on your accounts and working to reach your financial goals. I know I covered a lot in this letter, if you would like to chat or set up a meeting in person, don’t hesitate to give our office a call. We are in the process of setting up the ability to text clients, if that is something you are interest in, please let us know. It will allow for more frequent market updates. As always, please feel free to share this content with anyone you think would be interested.